Click here to view all obituaries
Search Obituaries
Immediate Need
We are here to help you. If you have need of our services, please call us, day or night, at:
905-851-9100 or 1-888-836-6757
To better prepare yourself, we have provided you with some helpful information regarding the immediate need process.
Contact Us / Location
Excellent customer service and understanding. Joanne Jonovich was outstanding. She is the epitome of the ‘future’ funeral director and understands that the times are changing.
Home
Book of Memories, Obituaries & Tributes
Our Locations
Woodbridge Chapel
Weston Chapel
Brampton Chapel
Oakville Chapel
Contact Us
Planning in Advance
Start Preplanning Conversation
Cremations & Burials
Memorials & Celebrations
Resource Centre
Contact Us
When a Death Has Occurred
Answers to Your Immediate Questions
When a Death Has Occurred
Cremations & Burials
Memorials & Celebrations
Contact Us
Comfort Food to the Home
Flowers

Ordering flowers from our site ensures that your order will reach us or the family in a timely manner, and your gesture of support will remain acknowledged in the Book of Memories for future generations. We only work with local florists so we can maintain the sense of urgency and quality of your selections. We thank you for helping to support the family during their time of need, and will fondly remember your kind gesture.

To share your memory on the wall of Kathryn Stroud, sign in using one of the following options:

Print
On January 11, 2020 Kathryn Elizabeth Stroud left us to rejoin her late husband, Frederick Alan Stroud to begin their new journey together again.

Kay, as she liked to be called, was born July 27, 1927 in Aurora, Illinois to John and Mil... Read More
On January 11, 2020 Kathryn Elizabeth Stroud left us to rejoin her late husband, Frederick Alan Stroud to begin their new journey together again.

Kay, as she liked to be called, was born July 27, 1927 in Aurora, Illinois to John and Mildred Eeten. She graduated West Aurora High School in 1945 and then went on to Illinois Wesleyan College graduating in 1949 with a degree in business. She married her fellow student Fred on December 17, 1949.

During their 63 year marriage Kay and Fred resided in the Chicago area as well as Toronto and Montreal Canada. Their last home was in Eagle River, Wisconsin at Milestone Senior Living. An important aspect of their life together was the exploration of the world. Their favorite place was the Algarve in Portugal, one of the many countries they visited cherishing the lifelong friends they made along the way.

Kay was a person of many layers. She was a devoted wife. As a business woman she partnered with Fred in their advertising business in Canada. As a mother she was able to help with all levels of schooling and always proved to be a great intellectual companion. And as a grandmother she could not have enjoyed more the many accomplishments of her large family and sharing her passions and ideals with them all.

One of her greatest attributes was patience, never challenged more so than being a life long Cub fan who waited for 89 years to see them win a world series.

Kay is survived by her older sister Mary Carol Frieburg. She was preceded in death by her husband Fred, a brother John Eeten and a granddaughter Olivia Dillow.

Kay was a member of the Eagle River First Congregational UCC.

A local Memorial Service will be held at Milestone Sr Living in Eagle River on Saturday, January 25 at 2:30 pm, as well as a Service that day in Toronto Canada. At a later date the entire family will meet in Chicago for a celebration of their lives.

In lieu of ﬂowers please donate to the Arthritis Society.
Read Less

Provide comfort for the family by sending flowers

Donations are being accepted for: ALZHEIMER SOCIETY OF CANADA - SOCIETE ALZHEIMER DU CANADA.

We encourage you to share your most beloved memories of Kathryn here, so that the family and other loved ones can always see it. You can upload cherished photographs, or share your favorite stories, and can even comment on those shared by others. 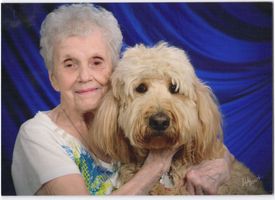 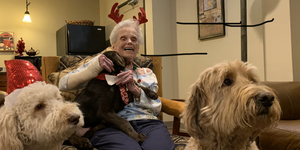 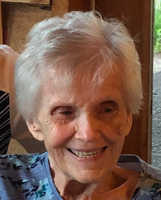 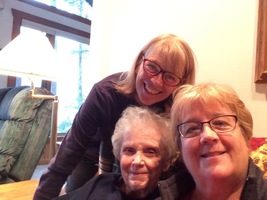