Click here to view all obituaries
Search Obituaries
Immediate Need
We are here to help you. If you have need of our services, please call us, day or night, at:
905-851-9100 or 1-888-836-6757
To better prepare yourself, we have provided you with some helpful information regarding the immediate need process.
Contact Us / Location
Excellent customer service and understanding. Joanne Jonovich was outstanding. She is the epitome of the ‘future’ funeral director and understands that the times are changing.
Home
Book of Memories, Obituaries & Tributes
Our Locations
Woodbridge Chapel
Weston Chapel
Brampton Chapel
Oakville Chapel
Contact Us
Planning in Advance
Start Preplanning Conversation
Cremations & Burials
Memorials & Celebrations
Resource Centre
Contact Us
When a Death Has Occurred
Answers to Your Immediate Questions
When a Death Has Occurred
Cremations & Burials
Memorials & Celebrations
Contact Us
Comfort Food to the Home
Flowers

Ordering flowers from our site ensures that your order will reach us or the family in a timely manner, and your gesture of support will remain acknowledged in the Book of Memories for future generations. We only work with local florists so we can maintain the sense of urgency and quality of your selections. We thank you for helping to support the family during their time of need, and will fondly remember your kind gesture.

To share your memory on the wall of Giovanni (Nino) Colussi, sign in using one of the following options:

Having survived various medical challenges in his youth, he met Rina in 1946; they married after a long courtship on April 24th, 1954; he immigrated to Canada after two weeks in May 1954 arriving at Pier 21 and then coming to Toronto, where his brother and many others of his townsfolk had settled. With his wife and brother by his side, together they raised their families and shared precious life moments with kinsfolk. He faced a working life of challenge and perseverance, but found his niche as a carpenter, at first travelling around Ontario to build bowling allies and then setting in Toronto as a sub-contractor. His expertise led him to be known as “Mister Fix-It”. He survived two challenging surgeries at age 72 and again at 76 and lived to help raise his twin grandsons, i fioi, as he called them in our variety of Friulian. At age 90, he enjoyed an extraordinary birthday celebration at the Famee Furlane Toronto, the result of which was a significant donation to Villa Leonardo Gambin long-term care home for redecorating the 7th floor family room in murals depicting his hometown. On April 24th, 2019, he celebrated 65 years of marriage in a quiet family dinner. Following a fall in late April, he spent five weeks in excellent respite care at Weston Gardens and then returned successfully home, his very favourite refuge. In addition to raising and caring for his family, his lifelong passion was choral singing, beginning as a youth in the voci bianche in his hometown under the direction of Maestro Pierobon and continuing for the last decades with the Italian Choir at St. Jane Frances. He loved to tell his family stories, gave unconditional love to all, was enormously grateful for the love of his immediate family and close friends, both in Toronto and in his hometown and never took for granted the care, kindness, and friendship of his friends, his neighbours, those who cared for him at Humber Hospital and most recently the community care workers from Bayshore
Read Less

Provide comfort for the family by sending flowers

Donations are being accepted for: Villa Leonardo Gambin Charity.

We encourage you to share your most beloved memories of Giovanni (Nino) here, so that the family and other loved ones can always see it. You can upload cherished photographs, or share your favorite stories, and can even comment on those shared by others.

Posted Sep 05, 2019 at 03:39pm
We, together, choose to plan a Memorial tree to remember your love for your work as a carpenter.

Posted Sep 05, 2019 at 12:56pm
To the Colussi Family
I would like to express my deepest condolences to you Gabriella, your mother Rina and the whole family.
I feel we have been blessed and lucking to have had our parents for the length of time to share in our life.
It is never easy to say good bye. My prayers are with you all.
From the Brussolo Family
Pierino, Nadia, Ivana, Roberto, Renza and our families
Comment Share
Share via: 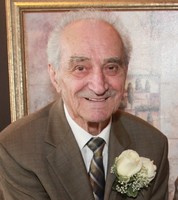 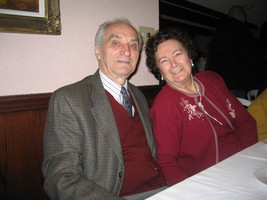 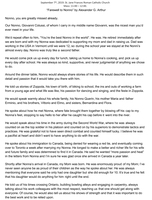 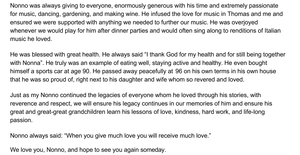